08:32 am: “Futures green to start the day after a nice 3-day bounce up from Tuesday lows. It’s wise to trim long gains and raise stops. Breadth was very oversold on Tuesday but today we should be back to Neutral so manage risk wisely.”

08:42 am: “Morning focus on TSLA and Semis as they have been very strong and gapping up this morning. Looking for the opening print and see if we are able to squeeze higher some more OR fades to fill this morning’s gaps. AAPL AMZN GOOGL stocks have been weak, so watch to see if it gets some momentum or not.”

Morning Trades:  I started the day with “fade” in my brain, so I shorted IWM TSLA and META but that was tough and was able to save some and some others got stopped, so a messy first part of the day. I was red on the day and then saw SAVA flow, took some Calls and that basically brought me back into the green. I also added some RIVN for a red to green and that also gave me some cash flow. Ahead of lunch time, I faded again to TSLA as it was on day 4, and was able to get some cash flow, but had to close it, because they keep buying every dip. 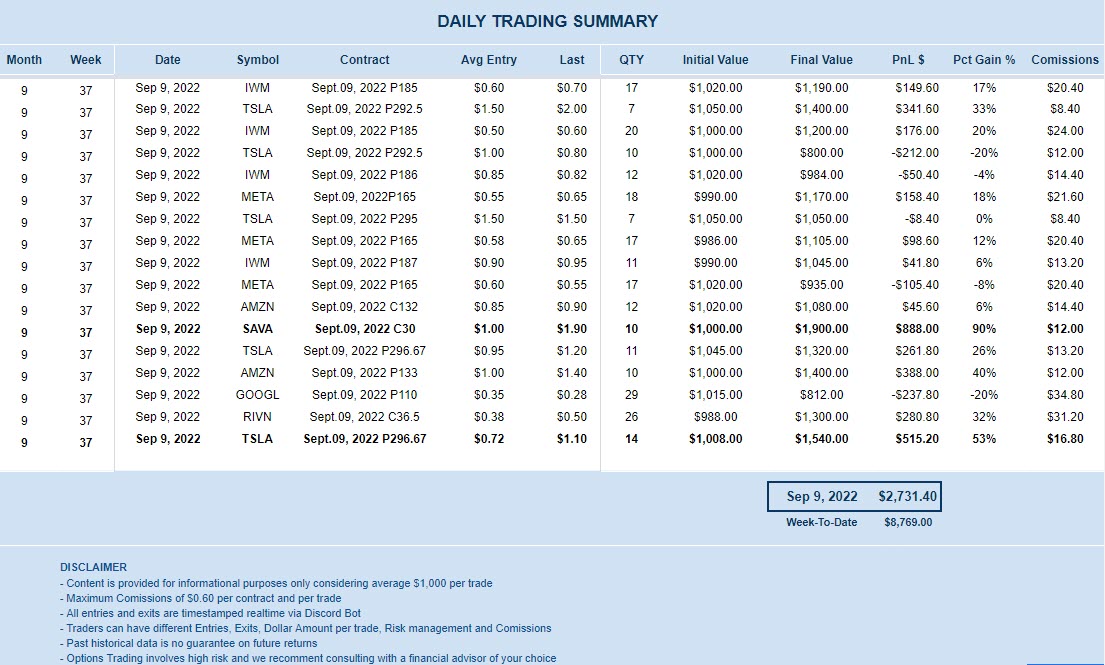 Losses review: I took too many trades trying to fade and although I was able to save some trades, others got stopped and was a very stressful first part of the day. But I tried to keep my head straight and move on, which worked well with SAVA RIVN TSLA that gave me back my money from early losses.

Key Takeaways: Don’t overtrade and don’t fight the trend! Market will not fade because it’s on day 3 or 4 up just because you want. Wait for intraday green to red moves and confirmation, before putting in front of a short squeeze up.

Look Ahead: The Tuesday/Wednesday bottom was nailed perfectly as the market was way too oversold, but now on day 4, things are getting trickier and that’s why it was tough for me, but it’s part of trading. Although a pause would be healthy after 3-4 big up days, the market still not overbought so if they want, can push way higher. Trying to stay open minded going into next week.